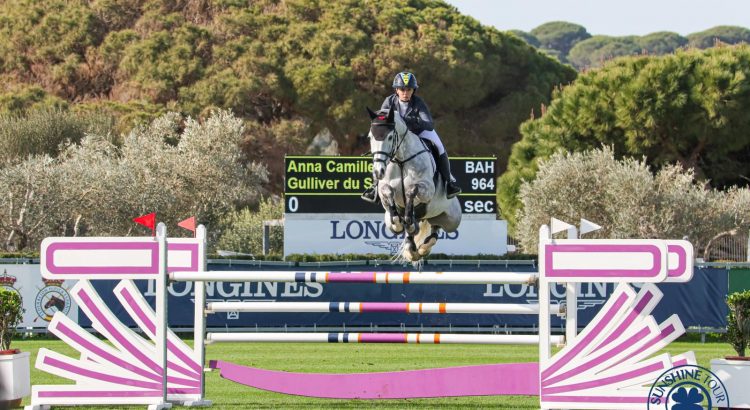 Equestrian Millie Vlasov is firmly on the path to representing The Bahamas at the 2023 CAC Games after her strong performance in the first weekend of the Andalucίa Sunshine Tour in Vejer de la Frontera, Spain. Riding at the CSI 4* level, Vlasov rode one clear round after another at successively higher heights. Her final clear round aboard Gulliver du Saint-Chệne in Sunday’s 1.40m class meant that Vlasov has met the first of the minimum eligibility requirements for qualification to the individual equestrian event at the CAC Games, scheduled to be held in May 2023 in El Salvador.

The weekend began with Vlasov and her long-time partner Beaumont M/V placing 8th out of a field of 135 in the 1.20m class. On Saturday Millie had another clear round, wrestling a fresh and forward Etos HBC around a challenging 1.30m course. “I had to work with him,” Vlasov acknowledged.

On Sunday Vlasov found herself in exalted company, riding the 1.40m course designed by Luis González Molina against the likes of the 2012 Olympic individual gold medalist, Steve Guerdat of Switzerland, and 2016 Olympic team gold medalist Penelope Leprevost of France. However Vlasov and her horse Gulliver du Saint-Chệne made short work of the course, going clear in a time of 62.54 seconds and ultimately placing 39th in the field of 102.

Vlasov will continue to compete in the Sunshine Tour under the guidance of her coach Gilles Bertrand. She intends to move up to the 1.45m level next week.