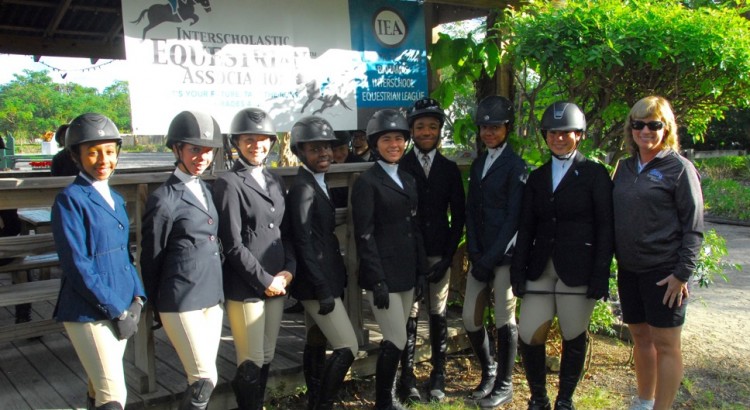 Eight young riders made their way into Bahamian sports history last week by participating in the Selection Trials Competition held by Equestrian Bahamas at Mariposa Riding Club. The riders competed for the chance to represent The Bahamas at the first ever IEA International Invitational competition, to be hosted by the U.S.-based Interscholastic Equestrian Association (IEA) in Conyers, Georgia, in February 2020.

Last week’s competition was historic in several respects. For the first time in over 30 years The Bahamas held a qualifying event for an international equestrian competition. It also marked the first time that riders from outside the United States have been invited to compete in an IEA competition. Now in its 18th year, the IEA has over 14,000 members across the United States riding and coaching Hunt Seat, Western and Dressage disciplines. On hand to observe the proceedings were IEA Founder Roxane Durant, and Simon Towns, IEA Zone Captain and Zone 4 Administrator.

The competition was held in a three-phase format, two rounds of jumping over fences and one round where the riders’ positions and techniques were tested ‘on the flat’. The Judge was Linda Mancini, a USEF R-rated Judge from Warwick, New York. Riders rode a different, randomly selected horse in each phase of the competition and was awarded a score from 0 to 100. When the cumulative totals of each rider’s three scores were announced, the five finalists were Mila Sands, Elle O’Brien, Nicholas Astwood, Maya Tilberg and Peyton Wong.

Equestrian Bahamas President Cathy Ramsingh-Pierre thanked the IEA representatives who were on hand for the event. “Their presence was an inspiration for our riders, who performed at a very high standard under great pressure.” she said. “Accolades are due to all eight riders, and particularly the five Finalists who made the team and will represent us in Georgia in 2020. Congratulations also to our coaches Erika Adderley and Kimberly Johnson for the wonderful job they are doing.”

Simon Towns, Administrator of IEA Zone 4 which will host the IEA International Invitational, complimented the Bahamian riders and coaches, saying, “The support and friendship shared by all was palpably evident…I am thrilled to host the first international show event between our two organizations, and look forward to a bright future for our young equestrians.”