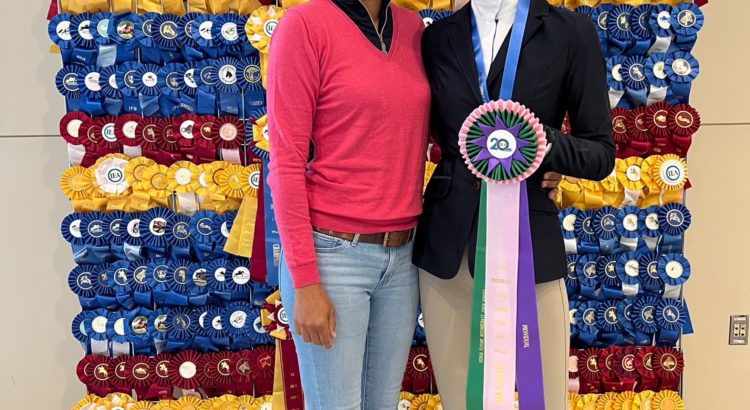 Ella Saidi turned in a polished performance to finish 5th at the Interscholastic Equestrian Association National Finals in Harrisburg, Pennsylvania, where over 800 leading middle and high school equestrian athletes from across the United States converged this past weekend to compete for top honours in Hunt Seat, Western and Dressage classes, championship titles and collegiate scholarships.

Saidi made history as the first Bahamian rider to make it through the grueling qualification process to IEA National Finals. That journey began in 2020, when the Bahamas Interscholastic Equestrian League (BIEL) became affiliated with the US-based IEA. Both organizations share the goal of providing opportunities for youth equestrians to compete at local, regional and national levels without the expense of owning a horse. The Bahamas is now Region 13 of IEA Zone 4, which also encompasses Alabama, Florida, Georgia, Mississippi, South Carolina and Tennessee.

Showing in the Future Intermediate Over Fences Individual class, Saidi competed throughout the season to finish as the top performer in her division locally. She then advanced to represent Region 13 at the Zone 4 Finals in Tryon, North Carolina, where a 2nd place finish secured her qualification spot to the National Finals in Harrisburg.

At the Finals Saidi proved herself up to the task, placing 5th out of a field of 18 by successfully navigating a technically challenging course which included special features such as rollbacks, bending lines and an option fence, designed to test a rider’s skill, judgement and control of the horse. In IEA competition riders compete on borrowed horses and get just two practice jumps before entering the ring – a format which mirrors collegiate competition and tests the rider’s horsemanship. Saidi’s equine partner in the ring was “Richie”, a 17.1 grey warmblood gelding owned by Serenity Farms.

Saidi, aged 14, was coached at the ringside by her local trainer, Erika Adderley of Mariposa Stables, who was effusive in her praise of Saidi’s performance. “I’m thrilled that all her hard work and dedication culminated in her ribbon win,” said Adderley.