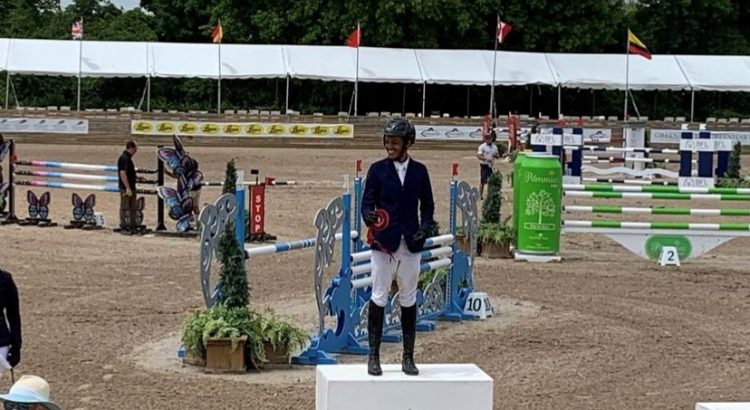 Davis and his mount, El Porvenir Corro, started strong and improved with each outing over the four-day tournament. In the 1.15m Open Jumper Speed class Davis and Corro finished just in the ribbons, placing 8th out of a field of 54. As the fences rose in height the pair got stronger, riding a clear first round and a fast jump off with just one fence down to finish 4th overall in the 1.30m/1.40m Junior/Amateur Jumper. Davis entered the final leg of the competition – the $1,000 1.30m Jumper Classic – with one goal in mind: to win!

Davis and Corro negotiated the technically demanding Classic course with speed and style, slicing turns in the jump off to go clear in a fast time of just 37.199 seconds. The ride was a personal best for Davis, his first win of a 1.30 Classic!

The entire weekend was a triumph, as not only did Davis win the $1,000 1.30m Jumper Classic, he and El Porvenir Corro finished as overall Division Champions at Angelstone, Canada’s fastest-growing Equestrian Show Jumping Tournament venue.

Davis will continue competing this summer in Canada as they progress toward their goal of representing The Bahamas in Santiago, Chile, at the next Pan Am Games.